About: Nathan Gilles is a science writer and journalist based in Vancouver, Washington.

His writing has appeared in Columbia Insight, YES! Magazine, The Columbian, Investigate West, The Register Guard, The Statesman Journal, The Portland Mercury, Oregon State University's Terra Magazine, and the American Association for the Advancement of Science Member Spotlight.

‘Assisted migration’ has come to the Pacific Northwest, but experts don’t agree if it’s a good thing or a radical response to a warming world 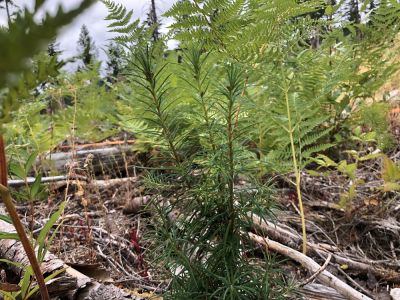 From the small town of Packwood, Wash., the site of Bower’s experiment in the future of forestry under an ever-warming climate is about a 45-minute drive, much of it along bumpy dirt roads that wind, dip and climb into the Gifford Pinchot National Forest.

“The challenge with this particular site is all the debris,” says Bower, a trained geneticist who bears a passing resemblance to actor Tim Blake Nelson (best known for his work in O Brother, Where Art Thou?).

In blue jeans, brown boots, forest green USFS T-shirt and yellow hard hat, Bower looks every bit the forester as he squints in an effort to find his research subjects: small spots of green, 6-to-8-inch-tall Douglas-fir seedlings grown from seeds that came from the Willamette National Forest and Siuslaw National Forest, both in Oregon and both nearly 200 miles further south and several degrees warmer than their current location.

In front of Bower is a stark reminder that the U.S. Forest Service still occasionally cuts down trees.

The 16-acre site is covered in the now supine remains of what was once a standing forest.

Logs and other woody debris—bleached bone-white by the sun—are surrounded by spots of green that Bower isn’t looking for: volunteer western hemlock saplings clinging to the base of a wide stump, knee-high vine maples, cottonwoods, bracken ferns, thistles and various grasses peak through holes in the debris where the gray, pebbly volcanic ash from the 1980 Mount St. Helens’ eruption still covers the ground.

Here and there stand full-grown Douglas-firs—about 80 feet in height and marked with orange spray paint, signaling that they should not be felled.

Also spared are trees the timber company that harvested the land didn’t want, including black cottonwoods as tall as the firs, and a much-shorter lone Yew.

And somewhere scattered among the living and dead organic matter are Bower’s baby Doug-firs, his climate migrants, his trees of the future.

This is an experiment in a radical new idea called “assisted migration” and a recognition by the Forest Service that climate change is here to stay.